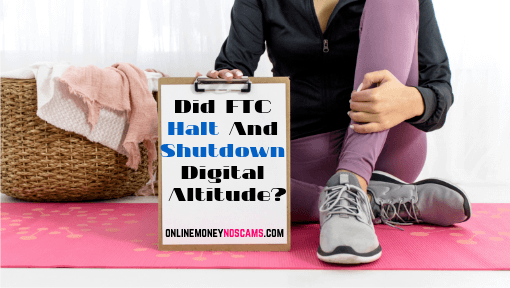 Contents Close Me
1 Did FTC Halt and Shutdown Digital Altitude?
2 What is the FTC?
3 FTC has Shutdown the Digital Altitude Business Coaching Scheme
4 More Than $14 Million Dollars in Question
5 What Does the FTC have to Say?
6 My Final Opinion About the Shutdown
6.1 A few Things I Have Learned Along The Way About Internet Marketing
6.2 Research, Research, and Do More Research…
6.3 Does High Priced Mean Better?
6.4 It takes Time and Hard Work
6.5 Internet Marketing Is a Skill
6.6 Do Your Research?
6.6.1 Sharing Is Caring

Last I heard this system has been shut down.

Word on the internet is that FTC has sued and halted Digital Altitude business coaching scheme. Although I have heard both great and bad things about the Digital Altitude program,  I really can’t believe that this has happened.

With that being said, I’ve heard that their educational platform was awesome however, the pricing was outrageous.

Regardless, there must’ve been a lot of people affected by this tragic shutdown, because thousands of people were involved with this platform.

Anyhow, I can definitely agree that the pricing of Digital Altitude was outrageous. Especially for someone who is just starting out with online marketing for the first time and had little to no money.

Truth is most people starting out in online marketing but, don’t have the capital to invest. Nor do they have the knowledge to succeed online. So, they tend to join platforms like these that are making over exaggerated claims. Claims of being able to make six and seven figures within a short period of time, which is called marketing hype. It’s just a selling tactic to get you, all pumped and ready to sign your life away.

You can read my original post of Aspire Digital Altitude here. After hearing the complaints that the FTC has brought forth, I do not recommend this platform to anyone.

What is the FTC?

Some consumers probably already know and understand what the FTC is but, for those who do not know, the FTC stands for Federal Trade Commission. Their job is to protect and educate the consumers. They investigate any unfair, deceptive, and fraudulent business practices.

The FTC collects complaints, investigates those complaints, and then sues any business, companies, or people that they feel are breaking the law. In addition to this, the FTC never proceeds with their actions unless they find that the law has been violated or being violated. It also has to be in the interest of protecting the public consumers.

If you’re ever involved in a product or program and you can’t seem to get your money back from them, you can always take the FTC advice into consideration.

They provide a sample letter of what you need to write in order to start the process. Click here to read an article by the FTC on Getting your Money Back.

After finding out this news, that has been broadcasted clear across the internet. I definitely would recommend all parties including people who have the money to invest into this platform to be aware that the FTC has in fact shut down the Digital Altitude business coaching program.

I actually did a double investigation myself, and tried logging into the membership area of the Digital Altitude platform and was redirected to an error message. That is when I discovered that the website is still live so, I attempted to proceed by clicking the “Get Started Now” button and received a message that said the “Service was not available at this time.”

So, what does this mean to you? This means at this time you’re not able to join but, if the court finds them not in the wrong you may be able to join at a later date and that is why I highly recommend you reading this review in its entirety.

More Than $14 Million Dollars in Question

The FTC has stated that the Digital Altitude platform has taken more than $14 million dollars from consumers who were looking into starting an online business. I can definitely see how they pulled it off because, when signing up to Digital Altitude the program claimed that consumers could make a six-figure income within 90 days or less.

Did you read that right? Six figures made within, 90 days or less????

No Way!! That was an overexaggerating statement if I should say so myself.

Anyhow, I’m here to tell you that, it’s nearly impossible to do that, affiliate and online marketing is a skill, regardless of what funds you have to invest in a program. Skills that have to be learned, tried and tested.

Nonetheless, because Digital Altitude has given consumers the impression that they can make a six-figure income within 90 days or less, the FTC has shut down the business coaching platform down for misrepresentation.

The FTC claims that it is a misrepresentation to the consumers because the vast majority of the consumers who paid into the program did not make a substantial amount of money, at all.

This halt is temporary for now, the courts have not decided on a final decision because, the United States District Court for the Central District of California just issued the temporary restraining order against the defendants on February 1, 2018. So, it’s best that you’re aware of what to avoid if you’re considering this platform in the future.

What Does the FTC have to Say?

According to the FTC, Digital Altitude persuaded consumers to continue paying for a series of membership tiers. With each payment, the consumer was supposed to advance to a higher tiered business level while receiving coaching from a successful marketer. The coach was supposed to provide individualized coaching and in return provide marketing knowledge to the new business owner so, that the consumer could build a successful business as well.

The problem is, that FTC has found the successful marketers were merely salespeople themselves. There was a lot of pressure to every new consumer to invest more into the products by the hundreds, and well up into the thousands of dollars.

In other words, the people that were successful marketers were actually in the program themselves just selling, the product to others and that didn’t sit right with the FTC.

Those sales were passed up and given to the person above you. In most cases, people make little to nothing to be able to afford programs this high priced. And, they never recoup their total investment.

It was also stated within the FTC complaint. That most people who joined the Digital Altitude platform did not make a substantial amount of income from this program at all.

In fact, even the people that invested well over $50,000 into this business coaching program, paid monthly fees for the membership and didn’t make a substantial income. Instead, they lost more money than they made.

My Final Opinion About the Shutdown

It really is a sad thing to hear that so many people have lost their hard-earned money. I really believe people work too hard to earn their money in the first place.

Above all, to turn around and lose it to programs that have no good intentions, is even worse. I personally never signed up to Digital Altitude but, I have signed up to a high ticket commission program that worked similar to this program.

In fact, the owner of Digital Altitude, who was ex-marine Michael Force was also once a member of the very same platform that I invested into which was called Mobe.

At the time that I invested in Mobe, I never really understood the ins and outs of the program. Needless, to say I wish I would’ve come across an informative post that could have helped me save a lot of my money.

By the same token, I’m sure most people who signed up to DA, they didn’t really know what they were getting themselves into until they kept going through the sales funnel.

That is the main reason why I do product reviews. It’s never to bash anyone or any one company but, to expose the truth of what you might expect when signing up to the program.

Research, Research, and Do More Research…

First, of all, I’ve learned to never rush into any program. Always do your research before, deciding to make a final decision.

In addition to this, I’ve learned there are legit ways to start an online business with no capital.

Now, if you’re serious about online business, of course, you will eventually invest into something but, what I’m saying is there are plenty of ways to start an online business with no money. At least not the type of money some of these programs are requesting.

In fact, I joined a program that has helped me and many others tremendously! It cost absolutely nothing to get started.

Just because, the platform is high priced with high-quality video training doesn’t mean that you’ll have more success with the program. I had to learn this one the hard way.

It takes Time and Hard Work

Internet or affiliate marketing does take time. In fact, it takes a lot of time and hard work. There are no loopholes, and it is a skill that must be learned. Truth is there are no push-button systems that exist online, regardless of what anyone tells you.

Internet Marketing Is a Skill

Internet marketing is a skill. I have learned it is something that you will constantly be learning during your online journey. There are always changes and updates to different algorithms like Google, Social Media, SEO and technology itself.

I highly recommend you to always do your research on any program that you decide to join. There are a lot of scammers online today. By doing your research this can help you save time and money, which are both important in our daily lives. This is something that I wish someone would have taught me when I first started online.

If you would like to get legit affiliate marketing training from A to Z read my review about my #1 recommendation by click here.

Welp! That is all from me folks…thank you for taking the time to read my post. If you found anything helpful in this post please do share this post with friends and family. As always have an awesome day.